I was always taught that global variables were bad - not evil - but something to be avoided. When one of my Computer Science professors gave us some starter code for a group programming assignment doing a 5-stage pipeline and cache simulator with a lot of global variables, I got thinking about why I don't like them. I came up with a good answer, and it comes down to math, like many things. 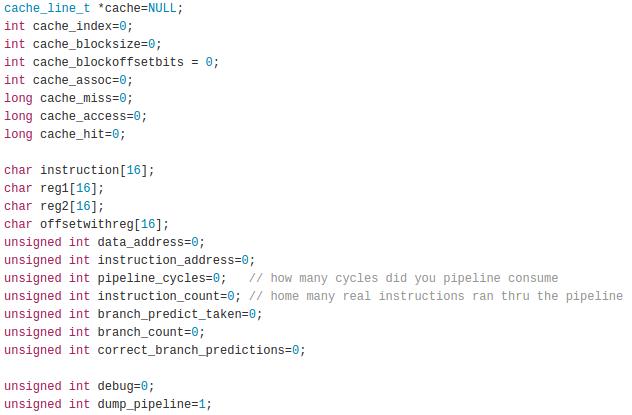 The above picture shows 21 global variables for a 550 line program, there is also one more unpictured and three #defines. You might see some variables that make sense. unsigned int branch_count=0; is forgivable, it just counts how many branch instructions were called, right? Or does it count how many branch instructions were taken... Uh oh. Okay, well maybe it just needs a better variable name. Well, yeah but, what function is responsible for incrementing the counter? The function that parses the instruction, the function that executes the instruction, some pipeline manipulation function? You are probably beginning to see some problems with this implementation, specifically about what function modified this variable, and when that modification happens. And this is just for a simple counter. See the line cache_line_t *cache=NULL at the top. Yes, that global variable is a dynamically allocated array that holds all of the simulated cache for the program. :open_mouth: Oh no! The answer to the question of "what function can modify this variable?" is: "probably all of them" and the specific order and quality of those modifications is much more unclear than a simple case of incrementing a counter.

Okay, forget all of that for a minute for a short example. Here is a short story that illustrates the problem with using global variables. There is a painter who gets hired by a woman to paint her shed. The painter is a professional and has a set of clean brushes, rollers, tape, and all the other tools he needs, except of course the paint. The woman says, "The paint is in the shed on the paint shelf in the spot labeled 'red paint'. So, she leaves for work and the painter goes and gets the bucket of paint from the spot labeled 'red paint' and starts painting. He is a little surprised that the paint is blue, since it was in the 'red paint' spot, but the woman must know that and have left him the color paint she wanted, even though the label doesn't correspond. He paints the shed blue, she comes home exhausted from work and is furious that the painter painted the shed blue. "I left the can of red paint in that spot yesterday!" she says. "It isn't my fault," the painter says, "I did exactly as you said. How was I supposed to know the wrong can was there?" Clearly the painter is right, he did his job. But the woman did put the red can of paint in the spot labeled 'red paint' there only yesterday. Unbeknownst to both of them, the woman's husband was up late last night putting the second coat of blue paint on his new birdhouse, and in his haste to get to sleep, he mixed up the cans of paint when he put them back on the shelf. What a disaster! That is my problem with global variables. The paint shelf is a global variable and entirely unnecessary. What if the woman just handed the painter the correct bucket of paint, exactly the color she wanted, at the beginning of the day? There wouldn't be this problem. That is the idea of no global variables.

Mathematical functions are functions that take a number of inputs and return an output, without changing the state of anything. The output value of a function depends only on the arguments that are input to the function, so calling a function f twice with the same inputs will always return the same outputs, regardless of the state of any global or member variables. This idea is a cornerstone of functional programming, but it can be used without all the other specifications that come along with functional programming. Take this mathematical function as an example.

It would be dumb to call f with a complex number, or with a pointer. It shouldn't be fs job to check that the function that called it isn't dumb. f should do its task assuming good input, and with bad input is free to return bad output, or crash, or light the computer on fire. :fire: A function in object oriented design might modify the state of some objects, or change its output depending on the state of something, like this:

Clearly a program written of mathematical functions is less complex than one that depends on state and global variables. Simple design is easier to debug. It allows the function to be freed from checking inputs and states of global or member variables. A function can assume that its arguments are valid, since it is the parent function's responsibility to pass in valid variables.

Functions that don't depend on global variables are safer, simpler, and more modular because they can assume valid input. It is a calling function's responsibility to pass in good input, thereby freeing the called function from the responsibility of checking in more detail than the type system can. Once a function has been written and it's corner cases tested, it is easier to narrow down the source of bugs in a program.