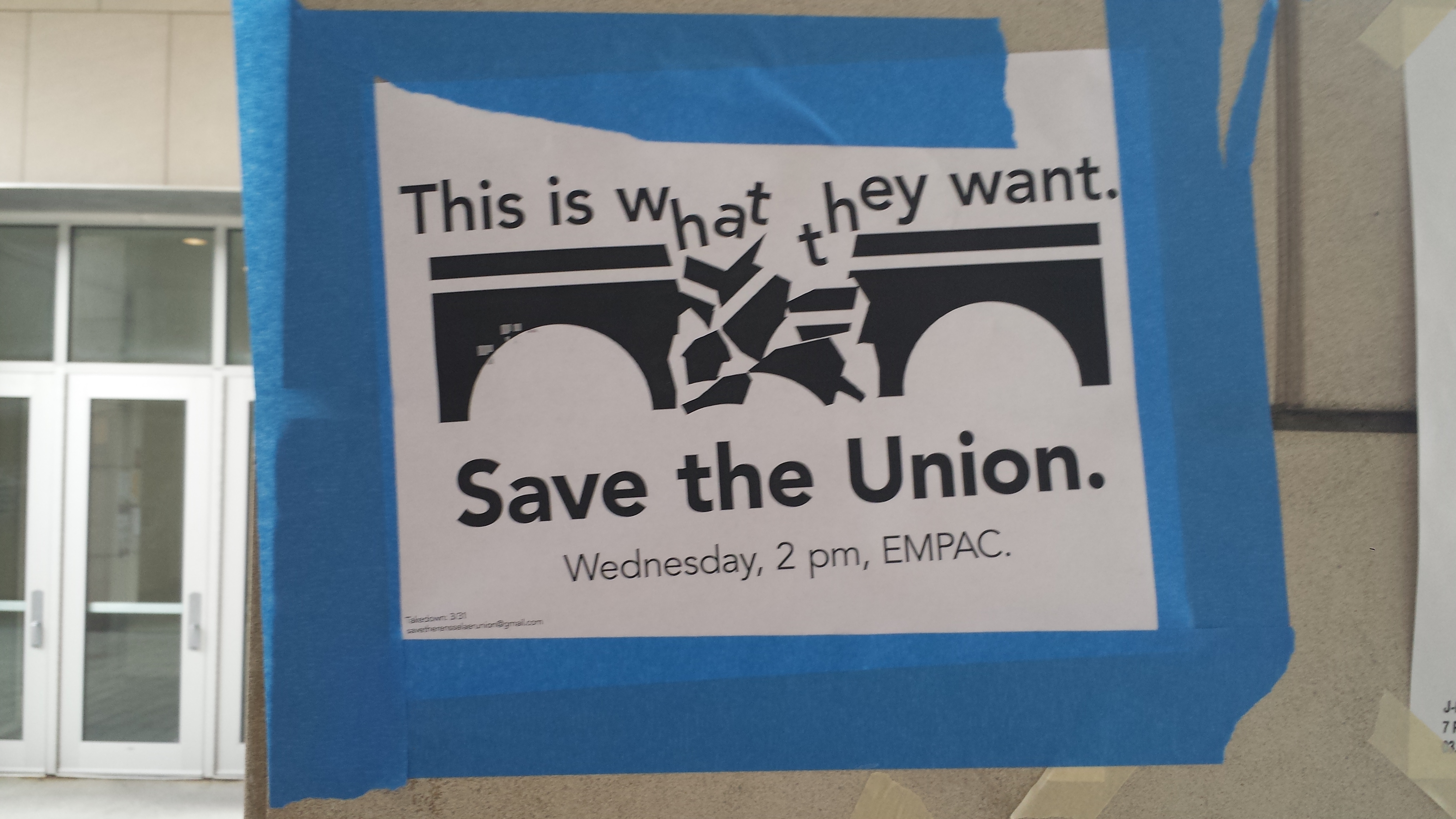 Posters like this one are scattered all over campus. Similar ones that say, "Don't let this happen.", "Save the Union", and/or feature a broken Union bridge logo. Most of the posters reference a date/time/location, Wednesday, 2pm, EMPAC. The side of the Union building has a huge "Save This!" taking up one whole wall. You might be wondering: what's all this drama about? Exactly.

As far as I've heard - the only source of information is rumors - the 'school', meaning some sect of the administration, plans to take away Athletic funding from the student-run Union and budget it seperatly. But, they are going to take away more money from the Union's budget than the Union was spending on Athletics. :0 IKR. They are probably going to use that money to give ~~Shirley~~ The Honorable Dr. Shirley Ann Jackson a raise. From the Union/Student's perspective, the school is trying to take money away from the student clubs and activities. Which hits hard because the students are very proud that we run our own Union with a multimillion dollar budget. So, I'm left to assume that this meeting time/location on the posters is the planned protest that everyone is talking about. I've even heard a rumor that reporters from The Washington Post among other national publications will attend the protest.

The resistance will fail. Here's why: The advertising campaign is the most extensive that I've ever seen on campus; it is extremely dramatic. But, it has a crucial flaw: it lacks substance. If you want your movement to be sucessful, it needs to be in the public eye for more than a week. For a diverse set of people to care about something for more than a week, that something has to affect them. The ads to "Save the Union" say nothing about how it affects me. The ad says that I have to participate in the protest to find out why I'm protesting. Hell no. I have class at 2pm on Wednesday, I'm not going to interupt my learning for a cause that I know nothing about. The only information I have is from highly-questionable sources. If this cause, this movement to "Save the Union" is to be sucessful, it needs to inform its target audience.

Even if the pro-Union revolution would help out the students when sucessful, I think that it won't be, because it lacks substance and an informed populus. But, maybe I'm wrong and T.J. would be proud.

A little rebellion now and then is a good thing. - Thomas Jefferson